The Aquablitz project was designed to provide a biodiversity snapshot within Melbourne’s waterway catchments. These catchments are home to a diverse range of animals, including fish, frogs, water birds, mammals, crayfish, reptiles and macroinvertebrates. To identify opportunities to protect and improve the health of waterways, Melbourne Water needs ongoing information about where various species occur.

Developed through collaborative research over several years in partnership with Melbourne Water, The University of Melbourne and EnviroDNA researchers, this environmental DNA (eDNA) approach allowed Melbourne Water to generate more biodiversity data than previously possible across a broad scale. This was enabled by eDNA being an efficient, cost- effective and comprehensive genetic survey tool. The study found that eDNA could be used to collect a great quantity of species presence information. A grand total of 179 species were detected from the single-occasion survey, setting a baseline for the potential of ongoing monitoring.

Melbourne’s catchments encompass around 25,000 km of interconnected waterways. Conducting a biodiversity survey across such a scale was not practical or feasible using traditional methods like trapping and electrofishing, both in terms of costs, short survey window and accessibility of many sites. eDNA allowed the scalable approach that Melbourne Water required, through it’s fast, easy-to-manage water sampling method, coupled with the power of genetic science.

Water samples were collected from 350 sites
that included rivers, creeks, estuaries and wetlands. Samples were sent back to our laboratory, and the EnviroDNA team extracted DNA and used a multi-species metabarcoding approach to identify wildlife species. Using this technique, we assessed for species from entire taxonomic groups (e.g., fish, vertebrates etc.), generating thousands of DNA sequences from water samples that enabled the detection of species. We then compared the eDNA results to existing biodiversity data that Melbourne Water and others had collected over 20+ years using traditional methods. 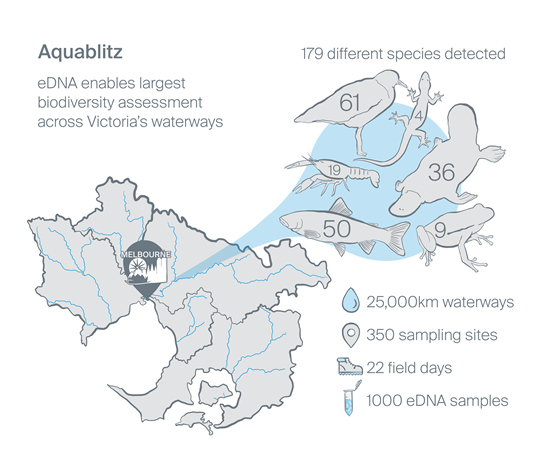 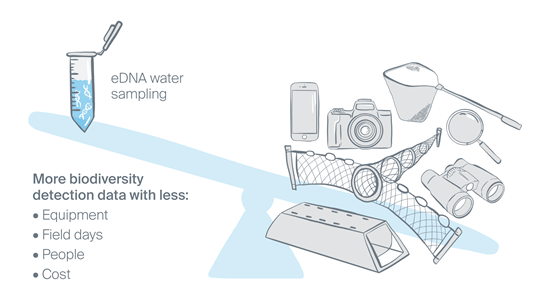 Results included a total of 179 species detected. Key findings below:

A total of 50 native and invasive fish species were detected in this single eDNA survey. Out of the 34 freshwater fish species previously recorded over 20 years of fish trapping or electrofishing surveys, there were only five that were not also detected using eDNA, despite this being a one-off survey during winter. Of those not detected, one is thought extinct and three others had been very rarely observed.

The waterways acted as a sink, pooling together both aquatic and terrestrial DNA from the environment. A total of 36 mammal species were detected including natives such as various possums and bats, as well as introduced species including deer, cattle, dogs, foxes and rabbits. Platypuses and water rats were also detected, both difficult species to detect due to their nocturnal and cryptic behaviour and sparse distributions.

A number of aquatic bird species were detected, including the threatened blue- billed duck, Australian shelduck and the magpie goose. eDNA was also able to detect arboreal and terrestrial species like the flame robin, the satin bowerbird and Australia’s iconic superb lyrebird. Whilst these species do not inhabit the waterway itself, their interaction with the waterway combined with the sensitivity of eDNA enabled their detection.

There was a total of 19 decapod species detected in this survey. These included new records and possibly new species of burrowing crayfish that nobody knew lived in Melbourne’s water catchments. Burrowing crayfish are elusive and very difficult to find, and we now believe that eDNA is an efficient method for detecting them in comparison with current capture methods.