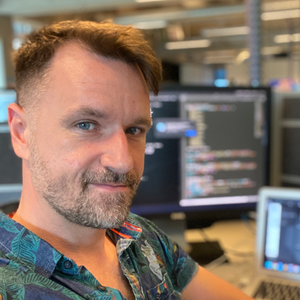 Nenad is a bioinformatician who loves figuring out the meaning behind letters in DNA. He is fascinated by finding patterns among them and understanding the impact they have on the world we live in. After completing a molecular biology degree in Croatia, he received his PhD at the University of Cambridge, working on a zoo of non-coding RNAs that were freshly discovered in animal genomes.

Nenad then moved to Australia to work on big genomic datasets where he developed codependency with RNAs and DNAs involved in evolution and disease. At EnviroDNA, he can utilise his skill set in an area that contributes to environmental conservation. Uniquely, he feels he mostly does this by staring at black screens and using supercomputers (that he has never seen in person but firmly believes they exist – sometimes just to annoy him!).

In his spare time, you can find him watering his plants, at the cinema or out camping in national parks.