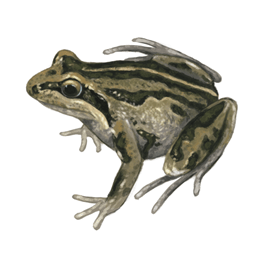 A large wetland dwelling frog and a voracious hunter, this frog will eat anything smaller than it (including other frogs!). Distributed along the east coast of Australia from South Australia to Queensland and including the north of Tasmania, it has distinguishable dark brown to black longitudinal stripes along its back.

This frog species eDNA probe was developed in 2015 and is highly localised.