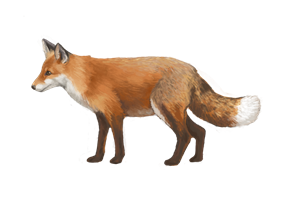 Included in the list of the world's 100 worst invasive species because of its affects on native wildlife, the fox is a successful and resilient species, and is known to be responsible for numerous small mammal extinctions in Australia. Too small to pose a threat to humans the fox has benefited greatly from the presence of human habitation and has successfully colonised urban areas.

This species eDNA probe was developed to positively identify fox scats and is broadly applicable across Australia. Has also been tested to detect foxes around water.