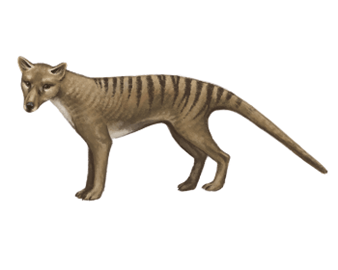 Thylacines were one of the largest carnivorous Australian marsupials to survive into modern times and were once broadly distributed. The species suffered considerably from hunting as well as other factors such as disease and habitat loss. Populations declined, and the last known thylacine died in captivity in 1936.

This species was officially deemed extinct in 1982 by the International Union for Conservation of Nature. EnviroDNA understands and acknowledges the extinct listing of this species. However, the opportunity to explore DNA from one of Australia’s most iconic and sadly lost creatures, sparked our curiosity to take this project on. ­If you would like to find out more about the development of this eDNA test, you can read our news article here.

This probe is yet to be in-field tested and its’ field sensitivity is difficult to establish. As a positive control, it has been tested using a thylacine hair sample obtained from a museum specimen. Our team was successful in obtaining a positive signal from DNA extracted from the hair sample using this probe.