A key factor in determining the use of eDNA sampling for species detection, is considering how and where species are shedding DNA into the environment. To date, our species detection services have mainly involved aquatic-based testing. Water samples present a great opportunity for eDNA surveys because DNA spreads throughout aquatic environments. This means you don’t have the challenge of needing to locate exactly where the species is or was when undertaking eDNA water sampling.

Using eDNA water sampling is highly effective at detecting aquatic species, and in some cases detecting terrestrial species. Waterways act as a sink, capturing DNA from surrounding wildlife who visit, fly over or inhabit areas close to the waterway. Furthermore, getting creative with water sampling for terrestrial species can pay off as the water doesn’t always need to come from a waterway. There is an opportunity to strategically use unique sampling methodologies that can target species of interest. For example, this study was undertaken using eDNA to detect an agricultural insect pest - the Brown Marmorated Stink Bug - by sampling rinse water from a variety crops.

Generally, terrestrial species aren’t shedding as much DNA into aquatic environments which would allow for easy eDNA sampling as noted above. So a new question arises, how do we capture their DNA in the environment without having to physically locate them?

EnviroDNA scientist, Farley Connelly, has been researching into the exciting new developments of eDNA sampling for terrestrial species:

“New techniques are quickly developing! The list of samples that eDNA can be extracted from to detect land-based animals is increasing and now includes pooled water, faeces, soil, plant material and even blood collected in ectoparasites. In two separate studies, researchers in China and Bangladesh utilized blood from leeches to detect species richness in forest habitats (Weiskopf et al 2017; Ji et al. 2020). In both studies, leeches proved to be an effective vector to measure species diversity. The use of eDNA as a terrestrial biodiversity survey technique is still in the early days but the results so far are exciting!”

"Traditional methods for measuring biodiversity of terrestrial wildlife have some new competition. In a 2019 study published in Proceedings B, scientists at the University of Stanford were interested in comparing biodiversity detection between eDNA (from soil) and camera traps (Leempoel et al. 2020). Comparing 1132 days of camera trapping to 6L of soil collected near the cameras, researchers found that eDNA was not only able to detect a similar number of mammal species as camera traps but was actually better at detecting small mammals. This study provides evidence that eDNA can be used as a quick, non-invasive survey technique for terrestrial species." 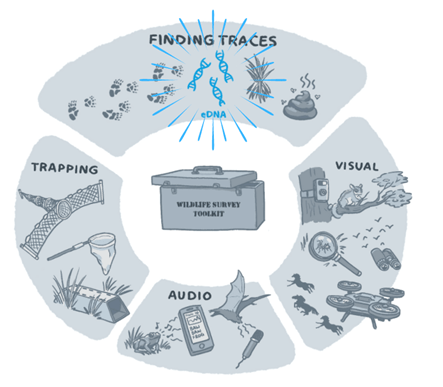 Want to use eDNA for detecting terrestrial species?
Here are some key questions to consider when deciding if eDNA is a valuable tool for your wildlife detection challenge:

Are you keen to explore terrestrial eDNA for your next project?

As our research in this area continues to grow, our available services in eDNA terrestrial sampling will also expand. We would be more than happy explore these techniques with you if you are interested!


This article draws on findings from: