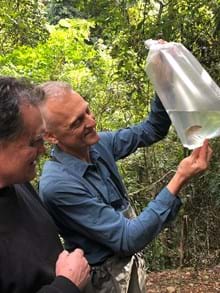 Our team is working closely with the Queensland Department of Environment and Science (DES) on a rescue mission to save the Queensland River Blackfish from near extinction.

Over recent years the River Blackfish has been pushed closer to extinction in Queensland due to climate change and habitat degradation. This imperilled species is both native and ancient to Australia, living only in cold-water rivers and streams. In Queensland, the species is restricted to the upper Condamine River catchment and has recently come under increasing pressure from extreme heatwaves and drought.

This rescue project has set out to establish a new population of the River Blackfish in a creek near Killarney in southern Queensland to help reinvigorate population numbers in improved natural conditions. The Queensland DES have successfully housed 50 fish, aptly named an ‘Ark’ whilst waiting for their conditions to improve. During August 2020, the Ark was released in a healthy, compatible waterway with the hope that the population will flourish in the months to come.

Why eDNA was selected and how it is being used as a monitoring tool?

In an effort to avoid stressing the delicate population with traditional electrofishing techniques, EnviroDNA is working with the team at DES to apply eDNA as a non-invasive method that will assist with monitoring the release and survival of the threatened species. Our River Blackfish assay that was originally developed using Victorian population samples has proven successful in detecting their northern counterparts in sunny Queensland! We have already produced sensitive detection results from samples taken at the time of release. 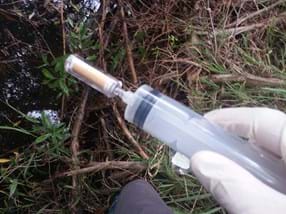 In upcoming months, we will continue to test water samples for River Blackfish DNA to monitor the survival and establishment of the released group.

These are critical conservation efforts for the freshwater species that likely would have been lost due to the increased pressure of rising temperatures in their ecosystem.

As the project continues, we hope to provide more good news updates on our testing of the threatened species and the success of these conservation efforts!

To discover more about this project including photos and videos of the River Blackfish release, you can visit the Queensland Department of Environment and Science media release here.

Got any questions about how eDNA could assist you?

Whether it involves working to protect precious native wildlife or a number of other possibilities, we love discussing new ideas using eDNA!  Contact us and our team will get in touch ASAP.